Following the critical acclaim of Communicado’s adaptation of Jenkins’s The Cone Gatherers, Fergus Lamont once again brings to life the work of one of Scotland’s finest writers. In a story rife with scathing Scots humour Jenkins introduces us to Fergus, a man at odds with his own identity. Despite a childhood in the slums, he learns of his noble connections and is determined to join the aristocracy and claim his rightful place in Scottish society. This journey of self discovery takes Fergus to the trenches in World War I, an Edinburgh country home and a weather beaten outpost in the Outer Hebrides before returning to his birthplace. In this adaptation of Robin Jenkins’s most searching exploration of the modern psyche, Communicado creates not just an unforgettable character, but an image of Scotland, and what it is to be Scots. 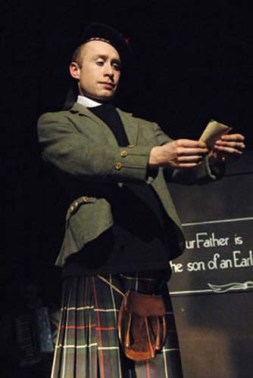 “After such a bleak glimpse into the abyss of social breakdown and alienation, it comes almost as a relief to turn to the bustling social and political world of Robin Jenkins’s great 1979 picaresque novel Fergus Lamont, now brought to the stage for the first time in a fine, passionate and witty adaptation by Gerry Mulgrew and his Communicado Theatre. Set in the strife-torn Scotland of the first half of the 20th century, Fergus Lamont follows the career of its eponymous hero from the slums of Gantock – a thinly-disguised Greenock – to the commanding aristocratic heights of Scottish society, where Tory MPs and moody poets in kilts hang around in New Town drawing-rooms discussing the SNP’s prospects in the forthcoming election.

Part Walter Mitty fantasist convinced of his own noble blood, part upwardly-mobile working-class meritocrat, Fergus carries with him echoes of Evelyn Waugh, AJ Cronin, Emlyn Williams, Anthony Powell and a dozen other epic chroniclers of 20th century British life. Mulgrew’s vivid three-hour production – featuring dozens of characters played by a cast of just nine actors – sometimes, inevitably, creaks a little under the strain of carrying so much narrative with such relatively slender resources.

The show benefits, though, from a wonderfully simple and ingenious yet bleak indoor/outdoor set by Gordon Davidson, from a tremendous accordion score by Karen Wimhurst played live on stage by David Vernon, and from a thrilling central performance by rising stage star Sandy Grierson. With its profound tensions between war and peace, individualism and solidarity, Scottishness and Britishness, this show makes a near-perfect curtain-raiser for the imminent Holyrood election. It also represents Mulgrew’s best and most timely work for more than a decade, and a welcome return to form from one of the most inspired and inventive theatre-makers Scotland has ever produced.”  ****  Joyce McMillan.  The Scotsman