The celebrated French play about noses, war and love letters, in a magnificent translation into Scots by the Scottish poet Edwin Morgan.

Morgan’s Scots translation of Edmond Rostand’s 1897 play Cyrano de Bergerac was commissioned by Communicado Theatre Company, and premiered in Inverness on 6 August 1992, before touring in Scotland and England. The title role was played by Tom Mannion, and the play was directed by Gerry Mulgrew.

“[I] asked Eddie to make a version in what I imagined would be English with Scots rhyme and rhythm. When the first act arrived I was shocked. I had [Anthony Burgess’ English translation] so firmly implanted in my head that reading Morgan was like having a lovely little minuet by Haydn suddenly interrupted by a Charlie Parker solo. I reread the Burgess last week …compared to Eddie’s it now sounds to me like polite conversation at a dinner party.” Gerry Mulgrew, Theatre Scotland 1992 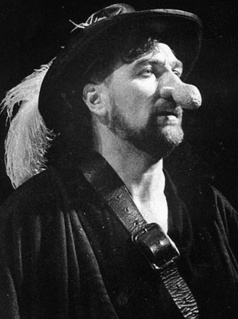 “The highlight of the Fringe is Communicado’s CYRANO DE BERGERAC: an athletic, superbly organised and infectiously entertaining account of one of the greatest romantic brouhahas in all literature.The whole thing is a splendid piece of swashbuckling – indeed I haven’t seen a swash so eloquently buckled in years. Edwin Morgan’s Scots-English translation of Rostand’s play simply bursts at the seams with Glaswegian vigour: his swaggering, idiomatic drive, his fine, lyrical sweep, his cheeky rhymes all fuel an evening of marvellous, warm-hearted theatricality.”
Sunday Times