By Gerry Mulgrew
A co-production with Sounds of Progress

A monumental piece played on site in The Old Fruitmarket space in Glasgow. About the Cherokee Indians and their Trail of Tears, the name they gave to the forced removal of the people from their homelands in Georgia/ Tennessee to Oklahoma. Forced to walk and travel on boats for a thousand miles, almost a quarter of the tribe perished on the way. They were led by John Ross, the chief of the tribe and a man who was half Indian and half Scot. Despite his orchestrating many years of delays and struggles through the courts, the Cherokee were finally evicted in 1838. Brave is a fragmented, impressionistic attempt to convey their story, and through them, the tragic story of the betrayal of the North American Indian.

The Sounds of Progress Band
Directed by Gordon Dougall 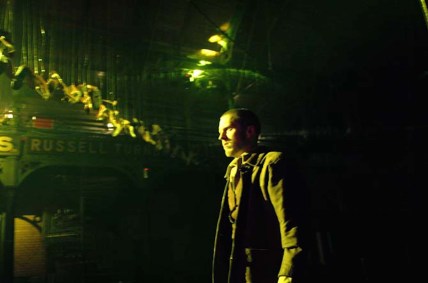 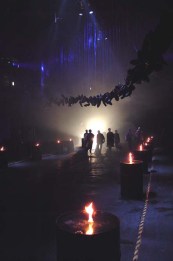 “The overall effect may be more of a pageant than a drama, but at times it is extraordinarily powerful. This is Mulgrew’s first show for a number of years….we have missed his brand of visually thrilling theatre. Welcome back.”
The Times, 2002